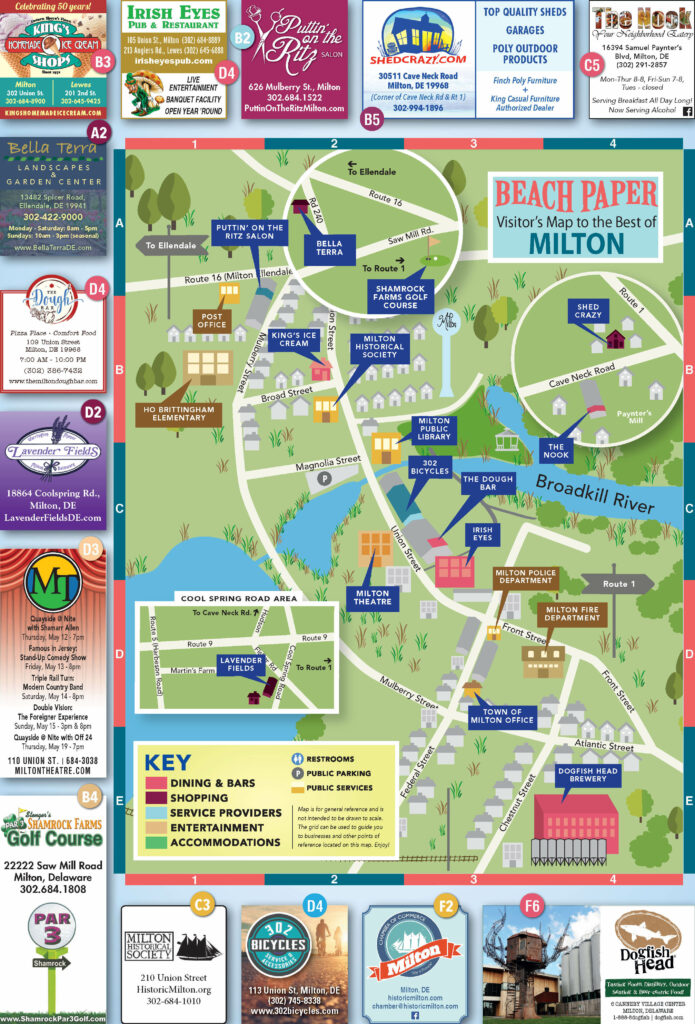 Milton’s heritage is very diverse and interesting. To the history buff, Milton provides a plethora of avenues down which one may traverse through local and U.S. history. Milton is the birthplace of five governors, a town divided in allegiance during the Civil War, home to many officers who participated in the famous War of 1812, and rich in both agricultural and political facts and figures, Milton can be a fascinating location to research.

Originally settled in 1672, it was once known as “Head of the Broadkill” for its geographic location at the head of the Broadkill River. This location, just a few miles from Delaware Bay and Atlantic Ocean, was ideal for shipbuilding in days of old. Many shipbuilders and sea captains lived and worked in Milton, and evidence of this life is still visible in some of the historic homes and landmarks in town.

Prior to the War of 1812, Milton was so renamed in honor of the English poet John Milton. Education and religion were integral parts of daily life in Milton, and remain priorities of Milton citizens today. Proud of their heritage, Milton residents pay homage to history through events and monuments that help all to remember proud moments past. A walk through local cemeteries in town can be an education in itself, with headstones and markers often denoting which residents were seafarers, perished in Civil War prisons or were notable for other reasons. Residents, through local historical societies and historic preservation efforts, attempt to keep Milton’s history documented and its artifacts and architecture protected.

The American Holly is Delaware’s State Tree – and residents are certainly proud of the role it has played in Milton’s history! Once known as the “Holly Capital of the World”, Milton at one time in history produced more Christmas and holiday holly wreaths and decorations than any other location.

In fact, this was highlighted in old black & white newsreel shorts that ran in movie theaters prior to the main feature of the day – showing how Milton residents grew, clipped, formed and shipped these decorations all over the country! The American Holly grows to a height of 60′ and displays dark green leaves and bright red berries. As you travel some of Milton’s avenues today, these beautiful giants are still a wonder to behold!

Other cottage industries have blossomed in Milton throughout history and following the wooden shipbuilding era, including that of button making! Large mother-of-pearl shells were once shipped to many Milton sites from the South Pacific for just this purpose. A group of enterprising men set up shop in homes and garages throughout town, where they cut and polished the button blanks and then shipped them to the northeast for further decoration and use on garments of all kinds. Dig up the rich dark soil in many a backyard garden in Milton today and you will still find sparkling pieces of mother-of-pearl in all shapes and sizes!

Agriculture too, has always been an important part of Milton’s history, and the fresh fruits and vegetables of local gardeners and farmers can still be purchased on the local streets any day in summer. The area also produces large quantities of soybeans, corn and broiler chickens. An afternoon barbecue is not complete without sweet Milton corn and fresh tomatoes, especially when followed up with some creamy smooth homemade ice cream from the family that has made and sold it here in downtown Milton for decades.

This brief summary of Milton’s history simply highlights some aspects of it. If you are looking for history, research Milton thoroughly. The opportunities for discovery are many. In fact, for history lovers, it’s another “paradise found”.